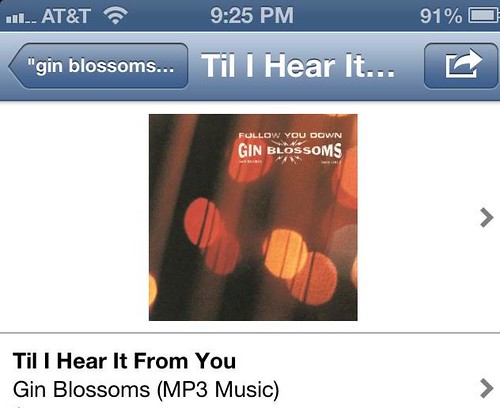 Might be Nahtamemo but SO weird – two mentions of Marshall Crenshaw today,
out of the blue.

One: I receive periodic emails from Spotify that tell me when new music I
might be interested in becomes available. Today’s email announced that an
EP by the Gin Blossoms was available. While reading their biography, I
noted that their hit "Til I Hear It From You" was co-written with them by
Marshall Crenshaw.

Two: I went to Bed Bath and Beyond to try and find a rack for my roasting
pan, and a familiar song was piped in – "Someday, Someway" by Marshall
Crenshaw. Now there aren’t too many people who even know who Marshall
Crenshaw is – he pretty much had the one hit. I remember hearing on Long
Island’s AOR radio station how he was always playing venues there when I
was young, but he was not super famous. It’s odd to have two references to
him in the same day. Wouldn’t think twice about the Beatles, but Marshall
Crenshaw ? Really.

Gin Blossoms makes me think of the 90s and the damp, cricket-ridden little
cottage I lived in at the time. Landlord’s son and I hung out and crushed
on each other, but it never went anywhere. Lots of music, meals,
motorcycles, good times… not so much as a kiss. It’s funny how the "bad"
boys can turn out to be the greatest gentlemen. He had a garage band that
played a different Gin blossoms tune, "Hey, Jealousy". That’s why they
remind me of him.

As for Marshall Crenshaw, I just like the song. It’s hopelessly peppy for a
tune that is basically bewailing the fact that "I love you but I don’t get
you".

I got nuttin’ here. Maybe it’s not my Memo? Anyone reading here, go google
those lyrics and see if I’m just the delivery woman this time.